Nowadays, you likely are involved in development/devops tasks for the cloud and you are using a Cloud-based IDE (Integrated Development Environment) to accomplish your job, but if you don’t have any or you are not happy with yours, then this blog post will explain you how to get one, opensource and in a few minutes. 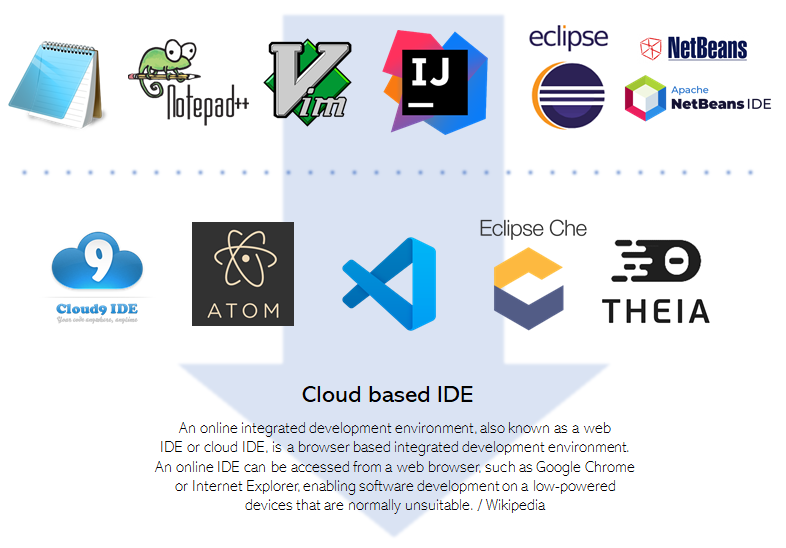 Is there any white-label Cloud IDE?

Who has used Eclipse IDE?, I think many of us, and Who thought was using it when using another different purpose IDE?, e.g. While drawing BPEL processes, while configuring the Apache Directory Server or while designing Integration Patterns. Well, your thoughts are right, all these IDEs were built on top of Eclipse IDE. And nowadays, in the Cloud Native Application world, likely your Cloud-based IDE is built on top of some below:

With this information, now we can answer the question “Is there any white-label Cloud IDE?”. And the answer is yes and it is GitHub Electron, but to be exact there are two and are Visual Studio Code and Eclipse Theia.

Getting a Cloud IDE for the masses

To be honest, MS VS Code is the IDE most used as it provides us a good developer experience, a great ecosystem of extensions and its community, but since the VSCode is free and open source, its source code is available to be downloaded. Many persons and organizations have created their own IDEs taking the advantadge of benefits of VSCode ecosystem, as like as VSCode did with GitHub Electron.

I would like to mention 2 forked projects based on VSCode, they are:

I’ve been playing with Code-Server for a while, it is mature and ready to use, and in this blog post I will explain you how to get running easily it in less than 5 minutes. In fact, it is so easy and friendly as VSCode that I’m using to write this blog post using Code-Server and Jekyll. 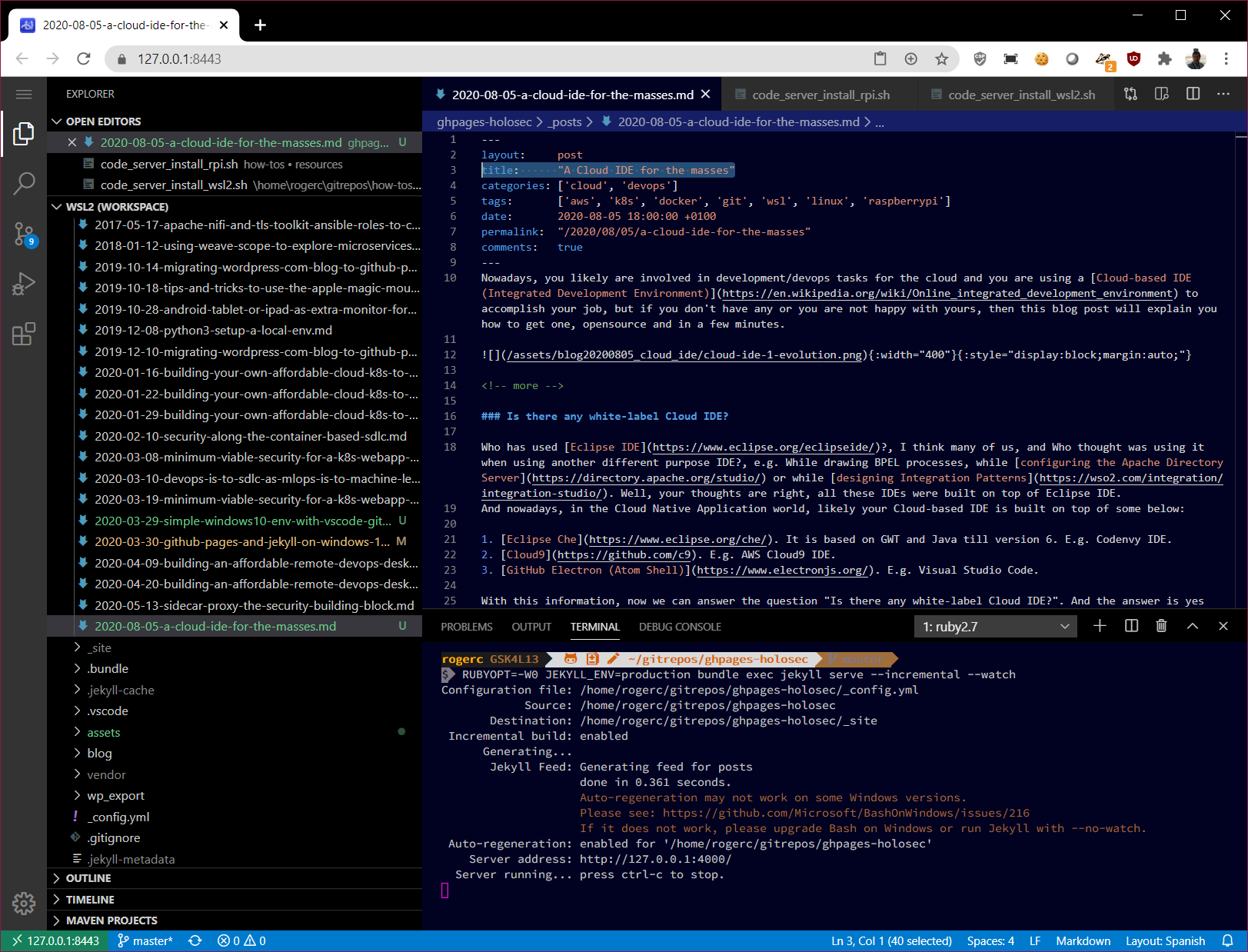 Installing and running Code-Server in Linux, FreeBSD and Mac OSX

Installing Code-Server in Linux (Debian, Ubuntu, Fedora, CentOS, RHEL, SUSE and Arch Linux) and Mac OSX is stright forward. Just go through the Installation guide where you will be able to use the installation script install.sh.

Installing and running Code-Server in Raspberry Pi (ARM based)

The ARM64 package available in Code-Server - Releases didn’t work in my Raspberry Pi 3 Model B+ with Raspbian 10 (buster), I had to install it via npm. No worries, I’ve prepared a bash script to do that.

This process will install Code-Server and only one VSCode Extension called Shan.code-settings-sync. This extension will allow us to sync configuration, themes, extensions between multiple IDEs using GitHub Gist.

Installing and running Code-Server in Windows 10 with WSL 2 (Ubuntu 20.04)

Unfortunately Code-Server doesn’t have a native installation for Windows 10. In my case I’m using Windows Subsystem for Linux (WSL 2) to get running Linux in Windows 10 and finally get Code-Server installed. A Linux running through WSL 2 has a few limitations like no systemd and so on. No worries again, I’ve prepared a bash script to go through the installation process smoothly. 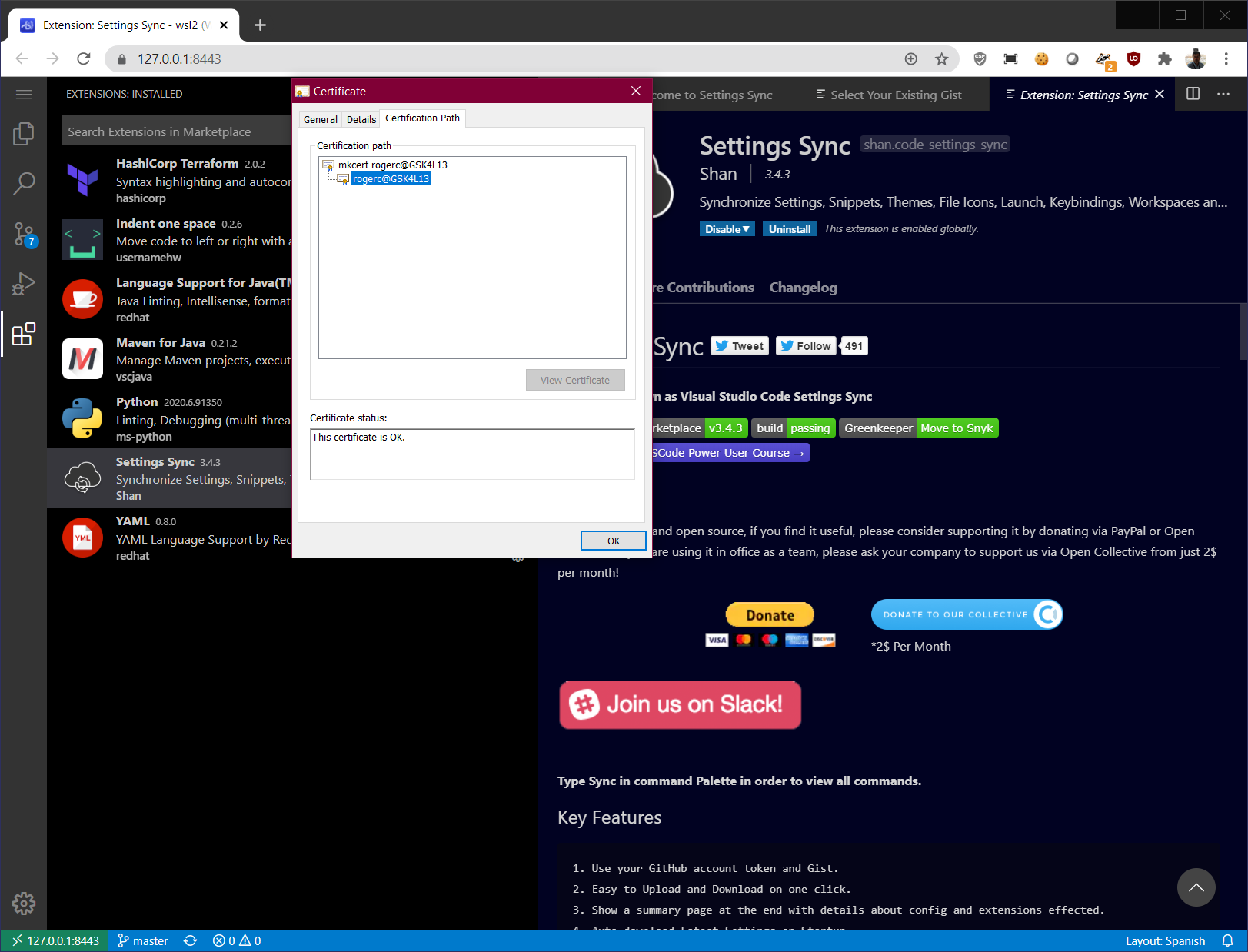 But… Code-Server isn’t installed on the Cloud

It will be on your favorite Cloud Provider. I’m going to use similar approach I used in Building an affordable remote DevOps Desktop on AWS, but in this new post I will use Amazon Elastic Container Service (ECS) and AWS CloudFormation.